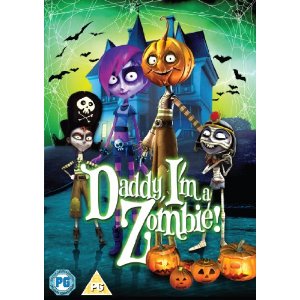 We were sent Daddy I’m a Zombie from
I let my 4 year old K go to town on this DVD popping it on on his daddy’s ps3 he proceeded to snuggle down and get comfy to watch his film whilst eating his dinner painstakingly slow as he said he wanted to see the end of it and not get sent to bed sooner. What a cunning plan 😀  See the trailer and read below his opinion.

?
Here is what K said in his exact words.
The best part was the sage and the pirate boy doing the adventure and the little girl that died and the dad and the witch.  (So basically all the characters, bless him)
It was fine, I would watch it again. He said the drawings (graphics) in it was ‘nice and colourful’.
He said it wasn’t scary at all it was cool and that he wants to watch it with his friends.
Mummy’s Opinion: This definitely wasn’t a film like Shrek where the parent may find it funny too so I didn’t find it as riveting as K in fact from an adult point of view the best point of the film is that the children are amused, That’s a big winner for me! So although I wouldn’t make an effort to watch it when they are in bed *sniggers I definitely would put it back on for him, well in fact I am on strict orders that he is to watch it again!
As a family we love to sit down with the duvet on the sofa and watch a film, in the A New Addition household we will be working on more film and game nights so look out for the posts 🙂