Tonight me and the male put the kids to bed and fancied some down time. No tv just me and him 🙂 I popped off to my ‘box of work’ and pulled out the Bananagrams.. Time to put them to the test! Me and the male love board games but we aren’t half a competitive couple!! As you may have seen from tonight’s tweets.. Here’s how our game night panned out… 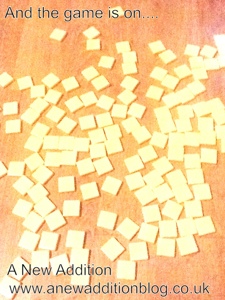 I poured the tiles onto to the floor and then turned them all so they were face down. ‘SPLIT’ I say as we both pick up 21 squares. Mine were pretty good I immediately noticed HOUSE 🙂

After a few more goes I was stuck arghh!! What to do now??

It was time to DUMP the K, this meant I would have to put the K but pick up 3 more tiles as my forfeit. The male was still plodding along with his tiles so I proceeded with my after my mini dilemma!

And won!! Sorry babe 🙂 better luck next time! *sniggers! He reckons when we have our next go he will make sure he isn’t tired from work and then HE will win. I don’t think so but there we go 😀 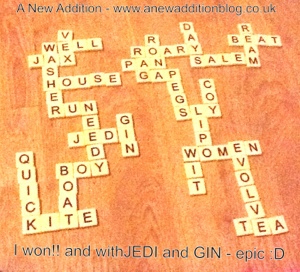 Bananagrams is a fab little game to play, we really enjoyed it. And it is packaged as a banana! Like really as far as games go that’s a pretty cool little carrier! I think next time my opponent shall be my mother although I wouldn’t put my money on me winning that one.. Maybe a few more practice goes first! I still have 2 more games to show you from Bananagrams that I intend to play with my eldest so do watch out for them 🙂 and no I shall not be competitive with him, mummy and k game time is special 🙂 If you want to know more about banagrams or any other games mentioned here is their site: Bananagrams

Do you play games with your partner or little ones? What’s your favourite? Have you played Bananagrams? I’d love to hear you thoughts!