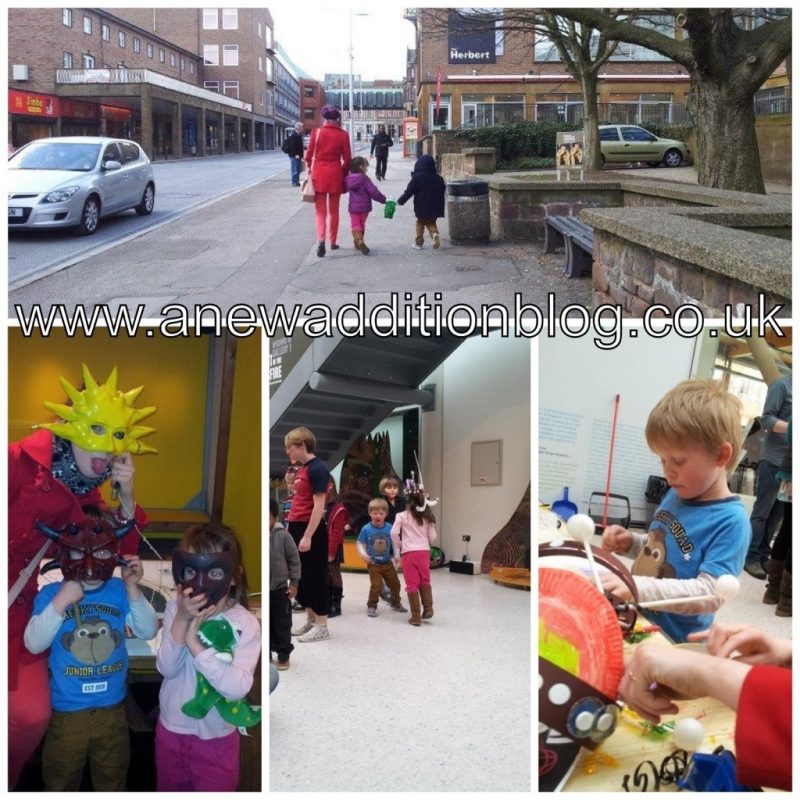 Today I woke up in one of them ‘I absolutely cannot be arsed’ moods. I noticed my ma was on facebook so I asked her what she was upto and she offered to make me and the boys breakfast yay! It was only when the breakfast was cooked that I got the motivation to ‘sort myself out’ sorry mum!! It’s a good job she only lives like 10 minutes away in the car! 🙂 And breakfast was yummy!

Of course today again I planned to take Ky and J to the Herbert Art Gallery for their children’s event. Ky last night asked me whether it would be okay to take him and not J. I guess he just wanted some offficial alone time with me, I mentioned it to my mum and she said she would be happy to watch J at mine when we went so off we popped to my house where my friend Helen and Her daughter P came round. She forced me with her pregnant ways that we should drive instead (I really kinda find driving scary) so I took us and the 2 kids IN MY CAR. The drive actually wasn’t that bad, the Herbert is quite close to me, I really think my driving issue is psychological *sighs I guess I just need to persist with it.

When we arrived at The Herbert the event was being held at the usual room but in a big open space as the children were to make ‘atom hats’ and the a team called ‘commotion’ were going to do a show and dance about atoms and forces.

The children found it really interesting 🙂 Ky and P were party protons, there were neutrons too (cant think what they did maybe stood still, while the protons partied, and there were the grumpy electrons going around being grumpy on the outside.

Once the children had had their fun and me and Helen had sneakily ate a few chocolate bars, we had a quick nosey at one of the sections in the museum and then I dropped Helen and P home. We picked up my mum and J where I persuaded her it would be an amazing idea for her to make meringues with the boys. (She had told me how easy they were) I thought she was joking but she had a quick trick of doing them with just icing sugar and 1 egg white and then popping them in the microwave for 50 seconds and they were Fab! Both boys loved it! We ate a yummy dinner of roast chicken, mash and carrots, the boys by this times we getting gradually more tired so we got them both all tucked up in the car and set off for home. The male was already at home from work when we arrived and had run a bath for the boys so it was a quick bath and off to bed for them.

What will tomorrow bring? And what have you been upto today?