For months Ky has been talking about what he would like off Santa for Christmas. And I mean for MONTHS! Even knowing that his birthday was in November and would be before christmas. The excitement of children ey! So he knew that his bike had started to outgrow him, despite his many attempts at trying to ride it bless him. So this is what he wanted for Christmas!

My mum and dad had brought him previous now outgrown bike and so they offered to help santa to treat him to a new bike of course to which he happily agreed with. So that was that! 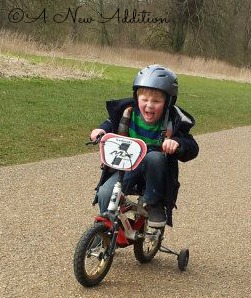 THEN last week his school had a Christmas fayre, and at the Christmas fayre there was a chance to meet a very special visitor, this visitor being Mr and Mrs Clause. We managed to get both my boys a ticket and we eagerly que’ed up to wait to see the big man himself. We are ushered in by an elf to see him and Ky goes and sits on his lap. We have a short discussion about our elf on the shelf Elfie and Santa tells Ky that he HAS been receiving messaging and visits from Elfie much to Ky’s delight and even said he was expecting a visit from him after the fayre. Amazing!! Thanks dude!!! Then there was the big question asked ‘So Ky what would you like for Christmas as you have been such a good boy?’ Me and my mum await for the usual about how much he would like a bike and do you know what he said!? A SKATEBOARD!!! He would like a SKATEBOARD! Well to say we were shocked was an understatement but ever since then that has all he has asked for amongst other little toys.. ben 10 and skylanders.. y’know the usual. He even came home from school today with a picture he had drawn where top of his list was a Skateboard.

Luckily I had had no idea what to buy him as his main present so I did a bit of internet searching, as you do 🙂 And found that sports direct are selling skateboards for £6.99 WIN! So I have been and purchased him one of them. Now just to but him a good helmet as it would be so lame for him to have his bike and skateboards for Christmas and not be able to play with them due to not having one!

Has your child ever changed their mind on their most treasured present just before the big day? Were you able to resolve things?

*There is a paid for link within this post