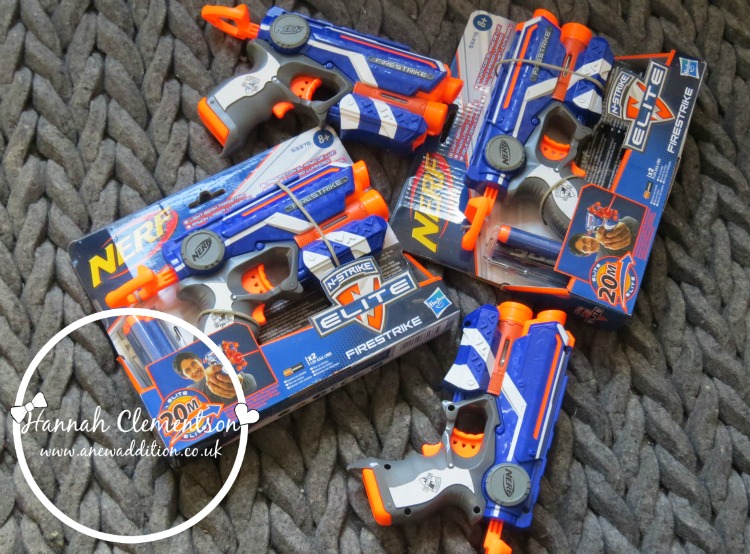 One of the best things I enjoy about having my boys is being able to be silly with them. So when House of fraser gave me a budget to spend on ‘a toy’ I decided to spend wisely and purchased 4 Nerf guns, thus this meant that when Andy was here we could have a Nerf gun war in our house.

We started with the photo below, the boys were open and Andy and mine were still boxed, however the nerf bullets were hidden so they did have to go and run off and find them. I had just placed them on the dining table so it wasn’t too hard for them but added to the fun, then as me and Andy were opening ours we told the lads to find their designated firing space but to be prepared to be on the move.

By this time the household was in fits of laughter and Andy had already received a soft shot to his ear lol. When our game was over there wasn’t a winner, we decided at the start we wouldn’t have a winner as we were having fun together and making it into a competition would just be asking for disagreements from the boys. They absolutely loved how fun this was, and we are considering next time perhap we will have an outdoor family nerf war, perhaps in the local park!

We kept this game to the downstairs rooms as we didn’t want running up and down the stairs, just typing that sounds like a disaster waiting to happen, we also put everything that could be knocked off or broken in a safe place (behind the curtain in the dining room). Sometimes it really is no TV and a good ol’ game and giggles that does us all a load of good.

What is the silliest game you have played as a family? I have purchased pie face for christmas day so I will be looking forward to seeing how my parents and grandparents take to that.

*we were sent the nerf guns for the purpose of this post, no monetary payment was given.