With Heathrow expecting a record 868,000 passengers over the Easter weekend and 200,000 extra families set to travel, the UK’s hub airport has announced its Little Linguists initiative, which aims to inspire children to learn new languages.

In partnership with the Centre for Economics and Business Research and Opinium, Heathrow has studied the role languages currently play in children’s lives as well as identifying the languages children should learn to set them up for maximum opportunities in adulthood. The findings revealed French, German and Mandarin as the three languages that should be learnt to best set kids up for life in ten years’ time, with language skills expected to add up to £500 billion to the economy by 2027. 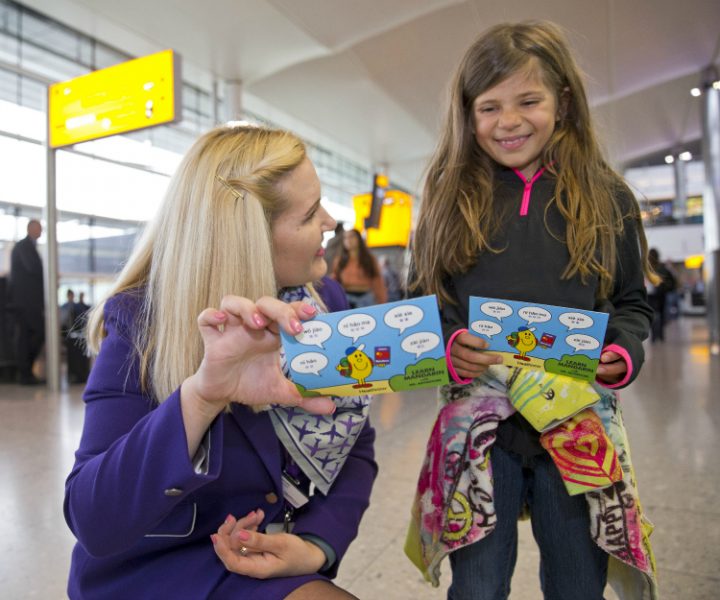 To help inspire children to learn new languages Heathrow has developed the ‘Little Linguists’ initiative, working with founder of Bilingualism Matters and Professor of Developmental Linguistics at Edinburgh University, Antonella Sorace. The airport has created packs of Mr Adventure themed flashcards, available for families to download online or pick up for free at information desks across all terminals airside over the Easter holidays.

The cards feature a series of simple phrases to introduce kids to French, German and Mandarin. The airports’ Passenger Ambassadors, or ‘Language Ambassadors’ will also be on hand to help kids practice their new skills, speaking 39 languages between them. Families can simply look out for members of the team wearing language ambassador badges who will be ready and willing to help get children practicing their skills.

In a new survey of over 2,000 UK adults with children under 18, results found that kids up and down the country aren’t making the most of the opportunities languages present them with. Nearly half (45%) of parents have children who can’t speak a second language*, with nearly one in five children (19%) not interested in learning new languages while one in ten (10%) say they find it too difficult.

The overwhelming majority (85%) of parents believe it is important for children to speak a second language. More than one in four (27%) suggest that this will enhance career opportunities and  boost employability benefitting from more opportunity to pursue careers overseas.

Heathrow CEO John Holland-Kaye said: “Easter at Heathrow brings huge numbers of families together to discover exciting languages, cultures and experiences. We hope this gives them a fun and educational start to their holiday, and inspires our future generation of little global explorers.”

Professor of Developmental Linguistics at Edinburgh University and Director of Bilingualism Matters, Antonella Sorace said: “This research demonstrates how important language learning is to the UK economy, and shows that many more doors are opened to people who learn a second language as children. We believe that language learning is hugely beneficial for children’s development and it’s a real investment for the future: children who are exposed to different languages become more aware of different cultures, other people and other points of view. They also tend to be better than monolinguals at ‘multitasking’ and often are more advanced readers. Bilingualism gives children so much more than just two languages so it’s fantastic to see that Heathrow is helping to get kids inspired about learning languages this Easter.”

As well as the Little Linguists initiative, the airport has a number of family-friendly offers during the Easter holidays, including ‘kids eat free’ at restaurants, soft play areas and appearances by Mr Adventure himself. To learn more about Heathrow’s range of family friendly initiatives visit: http://www.heathrow.com/family.