I love a good bargain, and an unexpected shopping trip with a friend where you stumble upon bargains is even better.

This is what happened to me today, I did the school run as usual and then my friend Helen said she didn’t to visit a few shops and would I like to accompany her. Now being childfree during my day I said I would love to. I also tipped her off to that I had seen a post on Facebook where some of the children’s UV Swimming costumes had been reduced to 10p so we said we would stop and have a nosey on the way.

B&M had sold out of the swimming costumes however they did have these bargains for me to grab! 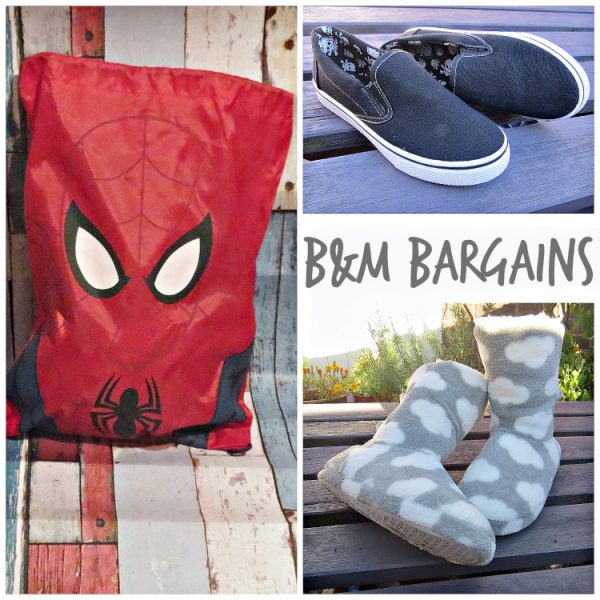 The spiderman backpack was marked at being £3 but it was meant to have a t-shirt in it too. I decided I would have a look and see how much it was when I got to the counter, it turned out it was a major bargain at 10p!! What’s even better is that Ky needed a swimming bag for school so a bargain that was needed makes things even more sweet.

The slipper boots were not on sale however they were so reasonably priced and are so comfy I wanted to share anyway. They cost me £5.99 and look great with my great fleece cat dressing gown.

The third of my bargains are the black pumps, these were in the sale marked at £2 and since I have given them to J I have heard lots of singing of how he loves his new shoes and that they have skulls in them. Bargains that make your children happy are always worth it.

I also brought a plastic toy spider that has a suction cup for a window for 10p, that will be great for Halloween.

And last but not least although I haven’t photographed I purchased some superman swimming shorts in a small hoping they will fit Ky. They were in the sale marked at £3 from £7.99 which I felt was reasonable, but upon being scanned they went through as £1. Hoorah!

So if you have a B&M near you it’s definitely worth going for a nose.

Next Page »
Hello! Is it me you’re looking for?
(you were singing weren’t you!!)
Welcome to my little piece of the internet!
I’m Hannah Rose!
Location: West Midlands
Read more in: ABOUT ME!